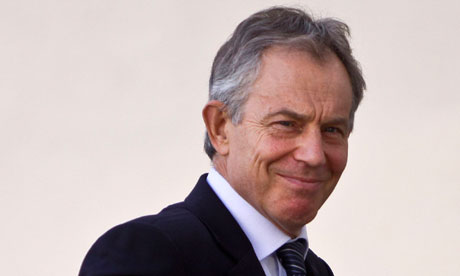 Tony Blair said he did not agree with the blockade on Gaza and failing to halt Israeli settlements in the West Bank was a setback to peace. Photograph: Keystone/USA-Zuma/Rex Features

Quartet representative calls on Israel to ‘lift weight of occupation’ to aid peace process, during interview with the Guardian.

Tony Blair, the special envoy of the major powers on the Middle East peace process, says Israel needs to “accelerate and deepen” measures to build Palestinian confidence that a state is in the offing following the collapse of the latest US peace initiative.

Speaking to the Guardian on a visit to Washington to meet Hillary Clinton, Blair – the representative of the Quartet of the US, EU, Russia and the UN – said that the American decision earlier this month to abandon attempts to pressure Israel to agree to a new partial freeze on construction in Jewish settlements was a “setback” to revitalising the peace process. He said that Israel now needed to find other ways to reassure the Palestinians that “statehood is a genuine possibility”.

“I think that, subject to genuine Israeli security worries, they should be lifting the weight of occupation for the Palestinians and giving them as much help and permission to develop as possible,” he said.

Blair praised the Palestinians for advances in bringing order to the West Bank, saying that senior Israeli military officers were impressed by the reforms pushed through by the Palestinian prime minister, Salam Fayyad, of his security forces in order to build Israeli confidence. He said that while Israel had taken some steps to reciprocate, it needed to go further.

“My focus, and occasionally criticism, is where I don’t think there are security reasons for not moving ahead: where the Palestinians need permissions to develop economic and, for example, educational infrastructure in area C (parts of the occupied territories under Israeli administration), where access and checkpoints can be moved,” he said. “I think the Palestinian security forces have got to be given the ability to pursue criminals where they need to.

“These are the areas where if Israel were making changes consistent with their security, they would be giving the Palestinians confidence that statehood is a genuine possibility … There is willingness on the Israeli side to make these changes but we need to accelerate it and deepen it.”

Blair said that the US decision a fortnight ago to abandon attempts to pressure Israel to agree to a new partial freeze on construction in Jewish settlements was a “setback” for attempts to get negotiations started again.

“If you don’t do it through the moratorium you’ve got to do it another way because that’s the key thing, because for the Palestinians their reluctance to engage with this negotiation unless they think it’s going to lead to a Palestinian state.”

Blair also repeated his call for Israel to lift the partial blockade of Gaza, saying it was counterproductive and that there is a “mistaken view which is that if Gaza is isolated, somehow Hamas is weakened”.

“We’ve been talking to the Israelis about this. I’ve always said I don’t agree with the blockade in Gaza. It’s not sensible. The best thing to do is to improve the living standards of people there,” he said.

Blair said that more than double the number of lorries were going into the territory since Israel eased the siege in June, but that was not enough.

“The real priority now is to get stuff going back out, particularly in the private sector, because there’s things like furniture and textiles and so on which if Gaza business got going that would provide employment.”