Neve Gordon, Tel Avivin yliopiston professori kuvasi tilannetta seuraavasti: “Imagine a sheriff offering the head of a criminal gang the following deal: ‘If you agree to stop stealing from your neighbours for three months, I’ll give you cutting edge weaponry and block any efforts by other law enforcement authorities to restrain your criminal activities.” 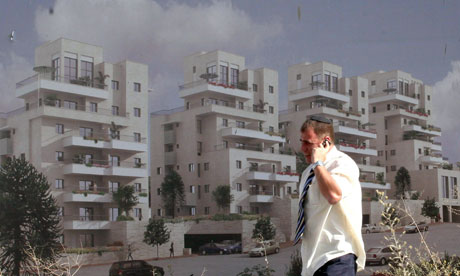 An Israeli man passes an advertising hoarding for a new housing project in the Jewish settlement of Har Homa in east Jerusalem. Photograph: Gali Tibbon/AFP/Getty Images
Israel says US has agreed to allow building in East Jerusalem but Washington has yet to produce letter showing it has agreed

Despite Washington having agreed to exclude the eastern part of the city from the 90-day moratorium, according to Israeli officials, it had still not sent a detailed letter on the understanding. Palestinians want building to halt in the West Bank and in Jerusalem, which they claim as their state. The US hopes a renewed moratorium will let Israel and the Palestinians work towards a deal on their future borders.

Today, however, a day after the Israeli prime minister, Binyamin Netanyahu, said a deal was imminent, the US still had not sent a promised letter detailing the understandings on the proposed moratorium.

Netanyahu’s spokesman, Mark Regev, would not discuss details of the talks between the two governments. But he said any moratorium would not apply to Jerusalem, whose eastern sector was annexed by Israel in 1967 in a move not recognised by the international community.

He noted that an earlier settlement slowdown, whose expiration in September led to the current impasse in peace efforts, did not include Jerusalem.

Palestinians want buildingto halt in both areas, which they claim for their future state along with the Hamas-ruled Gaza Strip. They have not said whether the partial freeze being brokered by the US would be enough to draw them back to the negotiating table.

The talks broke down late September, just three weeks after starting at the White House, following the expiry of a 10-month moratorium on new West Bank construction.

The US hopes a renewed moratorium would allow Israel and the Palestinians to make significant progress toward working out a deal on their future borders. With borders determined, Israel could resume building on any territories it would expect to keep under a final peace deal.

To entice the Israelis to sign up to the deal, the US has proposed incentives, including 20 next-generation stealth fighter planes and American pledges to veto anti-Israel resolutions at the UN.

But Netanyahu has had trouble winning support for the plan, even from his coalition allies. The ultra-Orthodox Shas party, which can make or break the deal, says it will let it go through only if Israel receives written assurances from the US that the building restrictions exclude Jerusalem.

In a sign of the backroom dealings, an official close to Shas said the party had received assurances that if it abstained in the vote, the defence minister, Ehud Barak, would authorise the building of hundreds of apartments in the West Bank right after the moratorium expired.

Some of the building would take place in ultra-Orthodox communities and other projects would be in a settlement just outside Jerusalem, giving Shas something to take back to constituents who might otherwise oppose another moratorium.