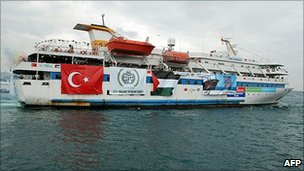 Its report said the action by commandos, which left nine dead, was “disproportionate” and “betrayed an unacceptable level of brutality”.

It said there was clear evidence to support prosecutions against Israel for “wilful killing”.

Israel rejected the report as “biased” and “one-sided.”

It insists its soldiers acted in self-defence during the 31 May raid.

Nine Turkish pro-Palestinian activists were killed and many others injured after Israeli commandoes boarded the six-ship convoy as it tried to breach an Israeli naval blockade of Gaza.

The convoy’s passengers were detained and later deported by Israel.

There was widespread international criticism of Israel’s actions, which severely strained relations with its long-time Muslim ally, Turkey.

In a 56-page report, the UN panel of three international lawyers said: “There is clear evidence to support prosecutions of the following crimes within the terms of article 147 of the Fourth Geneva Convention: wilful killing; torture or inhuman treatment; wilfully causing great suffering or serious injury to body or health”.

“The conduct of the Israeli military and other personnel towards the flotilla passengers was not only disproportionate to the occasion but demonstrated levels of totally unnecessary and incredible violence.”

The Convention is an international treaty governing the protection of civilians in times of war.

The UN fact-finding mission also said the Israeli blockade of the Palestinian territory was “unlawful” because of a humanitarian crisis there.

The panel had interviewed more than 100 witnesses in Britain, Jordan, Switzerland Turkey, but not in Israel.

Before the report was released, Israel dismissed the Human Rights Council as being biased, politicised and extremist.

After the findings were published, it said the report was “as biased and as one-sided as the body that has produced it”.

“Israel… is of the opinion that the flotilla incident is amply and sufficiently investigated as it is,” said the Israeli foreign ministry in a statement.

“All additional dealing with this issue is superfluous and unproductive.”

The Israeli government has begun its own independent inquiry into the flotilla raid, the Turkel Commission. It has two foreign observers, but critics say its remit is too narrow.

There is also a separate UN inquiry – ordered by UN Secretary General Ban Ki-moon – into the raid. Israel has said it will co-operate with the investigation.