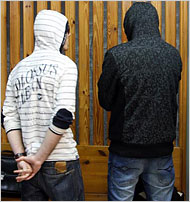 Roee Idan/Ynet A screen shot from the Web site of Ynet News shows the two Israeli reservists in court.

Updated | Thursday | 7:53 a.m. As the Israeli newspaper Yediot Ahronoth’s Web site Ynet News reports, Israel’s military put two of its own soldiers on trial on Wednesday for allegedly forcing a 9-year-old Palestinian boy to open bags they suspected might contain explosives during a raid in Gaza last year.

When the soldiers were charged earlier this month, my colleague Isabel Kershner reported that the military said in a statement that, “soldiers were strictly forbidden from making use of civilians for or during operational activity and specifically when it endangered the lives of the civilians.” If they are convicted of all charges, the soldiers could face up to three years in jail.

Ynet News explains that the Israeli military started its investigation of the two soldiers, who are both reservists, after it was contacted by the United Nations and the Israeli branch of Defense for Children International, a nongovernmental organization. The Israeli charity took testimony from the boy, identified as Majd R., last June.

Earlier this month, Ynet News published most of the child’s testimony and explained that, according to the indictment, the incident happened on Jan. 15, 2009, as members of the Israel Defense Forces swept into a residential neighborhood in Gaza City, during the Israeli offensive known as Operation Cast Lead. Ynet News reported:

The soldiers separated the men from the women and children and ordered the men to strip before leading them one by one outside the building. A soldier approached Majd, who was hiding behind his mother in fear — and motioned for him to step forward.

Here is what the boy said happened next:

I thought they would kill me. I became very scared and wet my pants. I could not shout or say anything because I was too afraid… He pushed me towards the small corridor in front of the bathrooms. He began shouting at me and speaking a language I did not understand… There were two bags in front of me. I grabbed the first one as he stood one and a half meters away. I opened the bag as he pointed his weapon directly at me. I emptied the bag on the floor. It contained money and papers. I looked at him and he was laughing. I grabbed the second bag to open it but I could not. I tried many times but it was useless, so he shouted at me. He grabbed my hair and slapped me very hard across the face.

The two soldiers were charged with overstepping their authority and “conduct unbecoming.” One of the defendants, identified as staff sergeant A. told Ynet News: “I feel hurt and betrayed; they stabbed me in the back after what I gave to the country. The Army was looking for someone to blame for the whole world to see and chose soldiers who did nothing wrong.” He added: “I guess they don’t understand who is for and who is against the country.”

Ynet reported that “the charges are considered light and do not carry a criminal record. The maximum penalty for overstepping authority is one year in prison.”

Al Jazeera English interviewed the boy, who is now 11, in Gaza this month. The Arab satellite network’s report, embedded below, suggests that the boy is still suffering trauma as a result of the encounter: