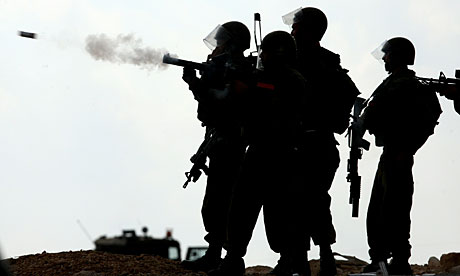 Twenty-six European grandees have urged the EU to adopt a tougher stance towards Israel including taking “concrete measures” and exacting “consequences” over continued settlement building on occupied land, which they say is illegal under international law.

The former EU leaders said that in the face of “the ongoing deterioration of the situation on the ground”, the EU, in co-operation with other international bodies, should put forward a “concrete and comprehensive proposal for the resolution of this conflict”. A deadline of April 2011 for progress in peace talks between Israel and the Palestinians should be set, after which the international community should intervene.

“Time to secure a sustainable peace is fast running out,” said the group, which includes former EU commissioner Chris Patten, former EU foreign policy chief Javier Solana, former Irish president Mary Robinson and another nine former heads of state. It sent a letter to EU president Herman van Rompuy, foreign affairs chief Catherine Ashton and all EU heads of government before a meeting of foreign ministers on Monday, saying: “It is clear that without a rapid and dramatic move … a two-state solution, which forms the one and only available option for a peaceful resolution of this conflict, will be increasingly difficult to attain.”

The letter says the group had received “signals” from US officials that the best way to help American efforts to reach a peace deal was to put a “price tag” on policies that contradict those advocated by Barack Obama.

The group calls on the EU to:

• Put forward a plan to resolve the conflict, including a clear time frame, together with the US, UN, Russia, and Arab League.

• Reiterate its position that it will not recognise any changes to the June 1967 boundaries [of Israel], that a Palestinian state should be “territory equivalent to 100% of the territory occupied in 1967”, and that its capital should be East Jerusalem.

• Refuse to upgrade ties with Israel unless settlements are frozen. “The EU has always maintained that settlements are illegal, but has not attached any consequences for continued and systematic settlement expansion.”

• Bring an end to the import of settlement products “which are, in contradiction with EU labelling recommendations, marketed as originating in Israel”.

• Send a high-level delegation, including Lady Ashton, to East Jerusalem “as a matter of urgency to draw attention to the erosion of the Palestinian presence there, and report back to the EU with an agenda of proposals to arrest and reverse the deterioration of the situation on the ground”. The situation in East Jerusalem, it says, is the “most critical flashpoint and greatest threat” to a peace deal.

The letter praises “impressive progress in the … development of the infrastructure of a Palestinian state”, in which the EU has invested billions of euros.

The signatories to the letter all held office within the past decade, when there have been repeated attempts to broker a peace deal between Israel and the Palestinians.

Ashton replied to the letter, which refers in detail to EU policy on the Middle East agreed a year ago, saying “the implementation of the [EU’s earlier] conclusions is proceeding on several fronts”, according to the EUobserver website.

“It’s hard to see how adopting uncritically all Palestinian positions and adopting a confrontational attitude to Israel will bring Israel and the Palestinians closer to reconciliation, compromise and peace.

“The document will only reinforce those who are suspicious of Europe’s intentions and continue to marginalise the EU’s role in peacemaking in this region.”

He also denied that settlement products were mislabelled.

The letter, sent earlier this week, coincided with the US abandoning its attempts to persuade Israel to agree to a fresh settlement freeze in order to bring the two sides back to the negotiating table.

The secretary of state, Hillary Clinton, was holding a series of bilateral meetings today with Palestinian and Israeli leaders in Washington.

Clinton was expected to outline the direction of the administration’s Middle East policy plans in a speech later. US officials say there is little prospect of direct talks. It is likely the Americans will return to shuttle diplomacy focused on issues of borders and Israel’s security demands.

Obama’s Middle East envoy, George Mitchell, is returning to the region next week.