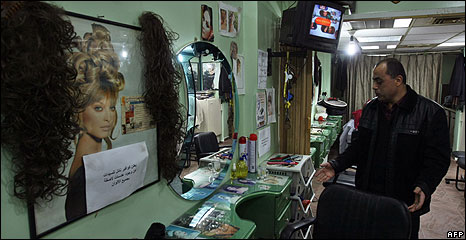 The announcement of recent restrictions to stop male hairdressers from cutting women’s hair in the Gaza Strip appears to be the latest step by the ruling Islamist group, Hamas, to impose more conservative Islamic customs there. But how far are these measures enforced?

Five middle-class Palestinian women in Gaza City discuss how life has changed in Gaza since Hamas won elections in January 2006 – and later seized control in June 2007.

There are five male hairdressers for women in Gaza – and I’ve been going to one of them for years.

He was laughing about it, because he and the others are all still working. But it makes me feel sad.

Last summer there were several “policies” which were never quite realised.

There was a ruling that female lawyers should cover their hair when acting in civil courts. But after people complained, it was dropped.

I think this thing against male hairdressers will be the same.

Since Hamas took over I haven’t felt any direct pressure on attitudes against women. I still wear the same clothes, I don’t wear the veil, I go to places with men and women.

Perhaps the general atmosphere is becoming more religious and conservative. My view is that the top level of Hamas wants a balance.

But there are people with more extreme views in the lower levels, people who don’t like the idea of women even leaving the house.

There may not be many of them now, but the numbers will increase unless conditions in Gaza improve.

Economic pressures have been building on both men and women for a long time.

The closure of Gaza creates the perfect conditions for breeding an extremist mentality. I am not optimistic about the coming generation, unless Gaza opens up.

Life for woman really hasn’t changed much under Hamas.

In my opinion the main problem that women in Gaza face is because of the closure. The economic situation affected women in that they were trying to find work, or ways to help support their family, so a woman has to go out and find a job, and that means leaving her home and children.

I don’t think it’s absolutely true that Hamas is imposing a religious code. In some areas of Gaza, I see women go out without a scarf, and even in jeans. They do not get harassed by Hamas – even in some cases they actually ask for help from Hamas officers on the street – if they have problem with a man harassing them or something.

I don’t think Hamas imposed long dresses in schools, though maybe some of the schools imposed them themselves. I have seen the wearing of the niqab [full face veil] increase a lot, but I don’t think that is to do with Hamas – it’s just the reality of the society, women are doing it on their own more and more.

I fully support the hijab [headscarf]. It’s our religion. A woman is more safe, and more comfortable, when she is covered when she leaves her home. I wear it because I want to wear it because, I’m convinced about it.

I would support it very much if Hamas would encourage it – as a Muslim I feel it’s my duty to advise women to cover, because it’s tradition, it’s religion. But in the end it’s her choice, it should not be imposed on her by force.

The biggest problem I see is unemployment. However much you improve yourself, you need to belong to a certain political group to get work.

I graduated in 2007 but I am between jobs at the moment. Many graduates are unemployed. This has a lot to do with Israel’s closure of Gaza.

In other ways, I’d say nothing has changed, although rumours do surface.

The most recent one was that the [Hamas] authorities would create a team of women who would patrol the streets to check what women were wearing.

We heard women dressed in trousers would be stopped and be asked to change their clothes. We started to be afraid of going out in the street. But actually, nothing like that has happened at all.

It was the same with school girls’ uniforms. We heard that girls would be told they would have to wear a long wide dress instead of their skirts and shirts.

That was supposed to be happening this year, but the school opened with girls still in the same uniform.

Mona runs the women’s unit at the Palestinian Centre for Human Rights.

The siege of Gaza, which Israeli tightened when Hamas took control in June 2007, makes women’s lives much more complicated.

There are shortages of water, electricity and cooking gas. It is very difficult to leave Gaza for medical treatment.

And after the war in Gaza last year, things got worse because many women lost their husbands. Women lost lives too, of course.

You can’t imagine how hard it is to be a disabled woman in this society. Or a widow.

Our Sharia law means that a widowed woman will lose custody of her children when a boy reaches nine years old and a girl 11.

Since the war, Hamas has ruled that a widow can keep her children if she doesn’t remarry. This is an improvement.

Women’s priorities in Gaza are focused on practical matters – a home, clean water and electricity. Finer points of human rights are not top of the list.

We have many problems with the Hamas authority, but we are not in a big fight with them about women.

People in Gaza feel they are in a big prison, they feel have no choices in life.

Conditions change according to the political situation.

When the first intifada started in 1987 most women covered up, because people could speak badly of you, or throw stones if you went uncovered in the streets. It is not as bad as that now.

Life in Gaza for women is all a bit harder than it should be, not only because of the internal Fatah-Hamas conflict, but because of everything, the siege, the war.

When it comes to the rules, such as Hamas making girls wear long dresses in school, or forbidding wearing trousers, it didn’t last very long.

People here didn’t accept it because this is personal freedom. Even some men in Gaza refused.

I wear whatever I want to wear. I do wear a headscarf because I want to, and I wear trousers and skirts according to my mood, though in some places I get weird looks – they’re not used to seeing a woman or a girl wearing trousers.

Hamas want to force themselves onto the people. They want the people to submit to them, this is their cover.

They destroyed the reputation of Islam, by saying we’re doing this because it is religion. This is how they won the elections.

My friends and I were discussing the other day, how it goes back to old traditions, that women aren’t allowed to speak out loud.

No matter how high they get in the community, they’re not really allowed to make the calls, to be the ones in charge.

Also, it’s harder for women, for example, who want to travel abroad to pursue their education, because of this thing that “she’s a woman, she can’t go alone”.